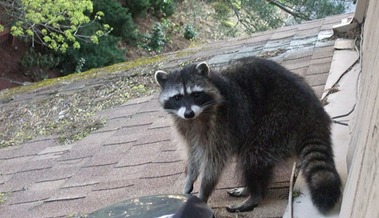 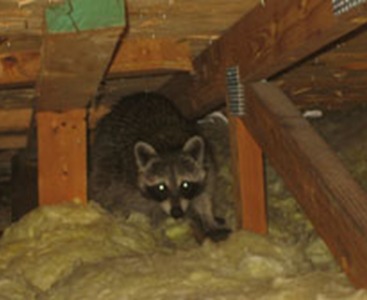 Raccoons are abundant throughout much of the state. In urban areas, raccoons will make dens in attics, chimneys, under houses, in abandoned buildings, and in woodpiles. Raccoons are opportunistic and seek a lifestyle that has the greatest reward for the least effort. Urban environments often present such opportunities and raccoons have been quick to adapt. Extension and resource agency professionals estimate that raccoons cause 60–70% of all urban wildlife problems in Kentucky.

Raccoons are a grizzled gray in color and are easily distinguished by their bushy tails with alternative black or gray rings, and black mask across their faces. The print of the hind foot faintly resembles that of a small child. Most towns and cities in Kentucky have raccoons living within city limits. Because raccoons are active by night (nocturnal), they are seldom seen. Raccoons cause problems when they lose their fear of humans and move into urban areas to live. Problems include feeding in garbage cans, establishing dens in chimneys and attics contaminating them with urine and feces.

Raccoons also may carry fleas, ticks, lice, distemper, mange, rabies, and canine and feline parovirus. The results of recent blood tests conducted on raccoons in Kentucky indicated that over 80% of those tested had been exposed to rabies as indicated by the presence of a rabies titer. Raccoon feces may also contain the roundworm egg (Baylisacaris procyonis). Humans, especially children that come into contact with raccoon feces containing eggs of this roundworm can also become infected. Clinical symptoms depend on the number of roundworm larvae present in the body and their location. If the larvae migrate to the eyes or brain, blindness or death can be the end result. Raccoons can also threaten the health of other mammals. Raccoon wastes, as well as parasites, should be removed from your home following our all-encompassing exclusion work.